Trade show games are a proven, yet dramatically underused activity to get more potential customers into your booth.

Trade show games are a proven, yet dramatically underused activity to get more potential customers into your booth.  After hundreds of client game implementations, we know games attract a crowd and get attendees engaged with your booth staffers.

But, if using games in your booth is a new idea for you, you understandably need more info.  So, in this article, I will share with you several kinds of games and game aspects to consider in your decision.

The first factor is that your game must be fun!  You want people to be magnetically drawn into your booth because you are hosting a game that looks like fun, that their friends have told them is fun, and that they can see people already enjoying to play. And, not just any people, but your target customers.  Be mindful that what you think would be fun as a 25-year old man may not be fun to your target audience of 45-year old women – or vice versa. Make it fun for your customers, not you.

Games with your Logo 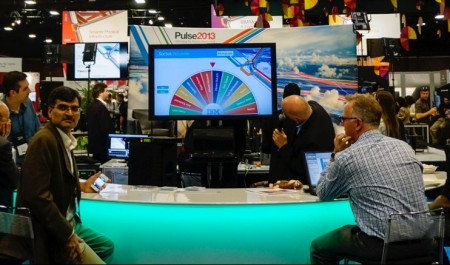 Your booth visitors will pay attention to your game while they play it, not your booth.  And this may be the most engaged they are during their visit.  So, ensure that your game has your logo in it, and even better, the look and feel of any graphics match your company brand. That way you get the maximum branding value and post-show memorability. 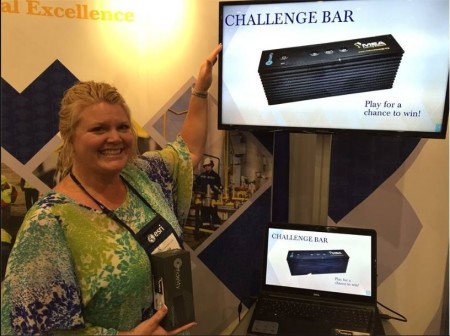 A game can be fun to play just to play, yet playing for a prize or giveaway is twice as fun!  Chances are you are putting money aside for promotional giveaways in your booth anyhow.  Now, pool that money into attractive prizes and fun giveaways that people are motivated to win. You can give everyone a prize, only give some people a prize (and they know right away), or only give some people a prize, and they don’t find out until the end of the day or the show. People can win the prize by spinning a wheel, with an instant win game and other game choices. You can make the prizes fun or imprinted with your logo.  Here are some ideas on how to choose prizes for your game.

Perhaps you may think this goes without saying, but it’s better to say it just in case: make your trade show game easy! Not necessarily easy to score or get correct answers, but easy to understand how to play.  It should be so simple that your booth visitors walk up and intuitively know how to play or learn how to play in 30 seconds or less.  They don’t have time for complicated games and will walk out of your booth frustrated. 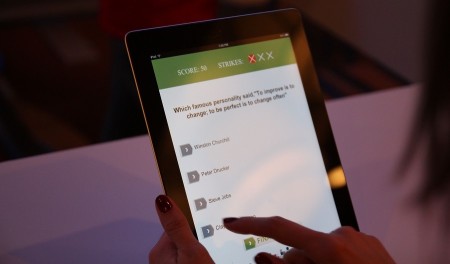 Trivia games are surprisingly popular, because they give attendees a chance to prove their knowledge, compete against friends and learn.  Plus, trivia games give you, as an exhibitor, the valuable opportunity to teach booth visitors about your products and services.  Trivia games can also keep attendees in your booth longer, and when they get uber-competitive, they even return to your booth and bring friends with them.

Games of Skill Versus Games of Chance 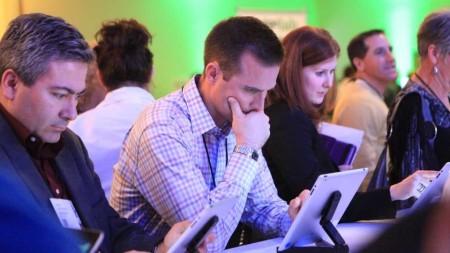 Games of skill give attendees a better chance to win if they can think or play with greater talent, such as a trivia game or a putting green.  Many games choose winners by random chance, such as a prize wheel or plinko prize drop games. Some games of skill are derived from sports, like pop a shot basketball or a miniature putting green.  Few sports translate to good trade show games – you don’t see exhibitors encouraging booth visitors with a chance to win at wrestling or pole vaulting! Ultimately, it’s up to you to decide: do you want to reward your booth visitors for skill (which creates competition that drives more visits) or just give prizes randomly so people are less afraid to try? 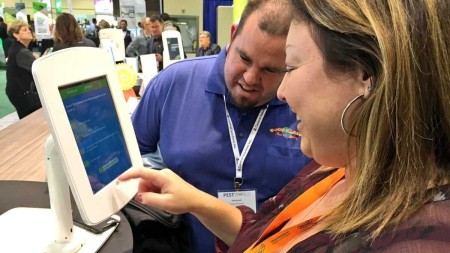 Technology continues to expand its influence in marketing, and trade shows are no exception. Trade show games have evolved to include many interactive games, to compete with many old-fashioned analog games. Analog games are tangible and usually cheaper, although they do require shipping and drayage.  Interactive digital games present a more modern image and can improve your ability to capture meaningful data about your leads.  You can read other advantages of digital games here.

Games are a great activity to attract and engage trade show booth visitors. Trade show games that are fun, easy, branded with your company logo and colors and offer a chance to win prizes are even better. Take the leap and add a trade show game to your booth and see how a fun activity can have a serious positive effect on your trade show ROI!

Samuel J. Smith is a thought leader, researcher, speaker and award-winning innovator on event technology. In 2011, BizBash Magazine added Sam to its annual innovators list. Since then, Sam has won awards from IBTM World, RSVP MN, International Live Events Association and MPI for innovation in event technology. You can read more from Sam at http://www.socialpoint.io and reach him by email at samueljsmith@socialpoint.io.